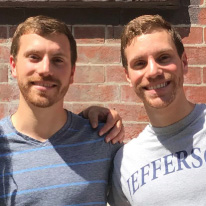 As identical twins, Michael and Dennis had always done everything together. After Vassar, they both studied biochemistry and went on to attend medical school at Thomas Jefferson University. Both became emergency room doctors. This spring, they shared another experience; at the height of the crisis, they both treated patients for COVID-19, albeit in different hospitals. The brothers had the same post-shift routine. They would either study the latest information about the disease or watch TV to get their minds off it. Talking to each other a few times a week about work was “cathartic,” they said, but they also made sure to talk about more mundane things. They would also speak often with their father, a retired emergency doctor, and younger brother, an emergency room technician.

For Michael, the seriousness of the situation hit when he encountered his first COVID-19 patients in early March.

They looked different and it made us feel helpless. That was the first time it felt like we were reacting to something we didn’t know how to manage yet. Within the first month, it had blown up to the proportions of running out of ICU beds and having to expand the hospital. It just felt like a different world.

Almost half your patients in a day, you’re asking, “How much extra oxygen are they going to need? Are we going to be able to stay on top of this, or is this patient going to deteriorate in front of us?” You have to build up some hardness just to be able to make decisions that could have life-changing outcomes.

Michael would call Dennis to prepare him for what to expect in Florida, where the numbers were trending behind those in New York. Ultimately, Dennis felt overprepared—people with other ailments were staying at home. But as Dennis recalls:

It was more anxiety-provoking at the beginning as we were preparing for the unknown using stories from other places. When things were happening in New York, we knew to pay attention.

As of late May, the twins felt like the worst was behind them. But they stressed that the public should do what’s necessary to prevent a second wave. According to Michael:

There’s still the fear about what’s going to happen once we start opening up again, and is it going to look exactly like it was before? Is it going to be worse? It’s still keeping me up at night.